You are here: Home / Lighthouses / Sunset and Surf at Marshall Point Light

It’s New Years Day, another year has gone and the promise of the next is still fresh in the air. As a photographer, I have always liked the idea of getting out and capturing the first sunrise of the year; if for nothing else than the concept of being there to witness the moment when the sun rises above the horizon for the first time. However, a quick check of the weather forecast last night indicated there would be total cloud cover and no sunrise. A morning glance out the window and at social media confirmed the forecast was correct, as the New Year was greeted by a dull grey morning here in Mid-Coast Maine.

Part of my daily routine is to look at the weather forecast over the next 24 hours for possible sunset or sunrise photography prospects. So as I make my weather check on this New Year’s morning, it quickly becomes apparent that sunset is indeed a possibility, as the morning cloud cover is supposed to begin to break sometime in the late afternoon.

Around 2 o’clock I make another quick check of the weather, which is looking pretty promising at this point. The cloud cover is supposed to begin to break in the Mid-Coast area around 4 o’clock or so, with sunset just shortly thereafter. I check a few more weather sources and make the decision to go for it. The last detail to iron out is the location, which ends up being the easiest part of the process. I decide on going to Marshall Point, one of my favorite locations along the entire coastline. This point of land is situated in a perfect position to watch sunsets, especially in the wintertime, and is also home to one of Maine’s most picturesque lighthouses.

Leaving Camden, the drive down to Port Clyde is uneventful and I am able to arrive about 30 minutes before sunset. There is a plethora of compositions to shoot here, but a lot is determined by where the tide is. High tide was around 3 o’clock this afternoon, so it has just started to ebb and the water is still fairly high. Taking this into account I make my way down into a small cove to the east of the lighthouse, where a few large rocks sit in the middle of the cove during high tide. I pull out my camera and look for the best spot to frame the composition. It takes a few minutes of moving my tripod back and forth across a set of rocks just above the waterline before I finally lock into my spot. I’m aiming to capture the sunset to the left of the lighthouse, which begins in the right side of my frame and extends toward the middle, with the incoming surf filling the foreground of the image.

The hardest part of creating an image with this particular composition is the ebbing tide. I try and line up all the elements of the composition together based on where the water level is. But due to the slow retreat of the tide, it will often times lead to me having to change the composition as the water drains out of the spot I am photographing. It requires you to be flexible with the image you’re trying to create and not get too locked into one composition.

So now that I’m set up, all I can do is wait for the sun to sink a little farther in the sky and, hopefully, light up the clouds. There is a nice swell coming in this evening, which is perfect for the shot I have in mind. I set my shutter speed down to around 1/5th of a second to smooth out the water, which I hope will help introduce a sense of motion in the image.

When the sun is setting, everything seems to move quickly. It seems like no time at all, and that the sun is low in the sky while color is beginning to dance across the sky. There is even a sun star showing as it sits right above the other side of the cove I’m in. This is the moment I was waiting for and as a swell moves into the cove I fire off a few frames. A quick look at the LCD screen of my camera shows exactly what I was hoping for, except the swell that moved through was a touch larger than I considered ideal. Watching for the next wave, I see one at the entrance of the cove, but unfortunately it lacks in size.

The ebbing tide is taking its toll on my composition and I deduce that I will have to get the swell I’m looking for in the next two minutes before I’ll have to move on. Looking once again I see the next swell coming in, and it looks perfect. I put my finger on the shutter while I wait for it to move into the frame, and as it does I fire off a few more shots. The preview on the camera looks good and I’m satisfied with the result. As another wave moves into the cove I decide to shoot it just for the heck of it. I fire a few more shots as it crashes against the rocks. It doesn’t have the same energy of the first wave, but it has a more subdued feel to it, almost a gentle movement to it. Looking at the preview a little closer, I’m actually ecstatic about it and like it more than the shot I had previously envisioned.

The tide has removed the water from much of my composition now so I set about finding another angle. I decide to turn my composition vertical and include some of the rocks in the immediate foreground. As the sun starts to drop to the horizon, I notice how the rocks and lighthouse begin exhibiting an orange glow. It’s a beautiful sight and as the swells continue to roll in, I fire off some more frames. I always find it best to take as many images as possibly when waves are rolling into a scene like this. This way I have a better chance of capturing the water as intended.

As the sun sinks below the horizon, all the light starts to flee from sight, vanishing with the source. Satisfied that I have captured something of value, I pick up my tripod and make my way over to the west side of the lighthouse. There is a small pebble beach here that is strewn with large rocks. These can make interesting foregrounds and I’ve captured a few shots here before.

The ebbing tide has revealed an interesting rock that is reflecting the last of the sunlight. As each wave comes and crashes around it, the receding water is creating interesting patterns. Attempting to capture this, I use a slow shutter speed to induce the sense of motion. After a few attempts, and some narrow misses getting water in my boots, I feel confident that I have captured an image that represents the moment. Calling it a day, I packed up and head for the car.

Another day along the Maine coast is ending, but these little adventures to capture a moment in time are the kind of experiences I love and cherish. Even more so when I’m able to come away with images I’m happy to be able to share with you! 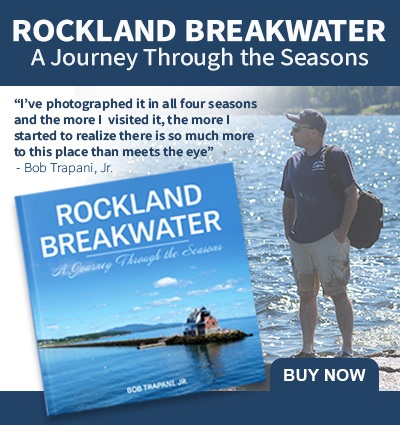 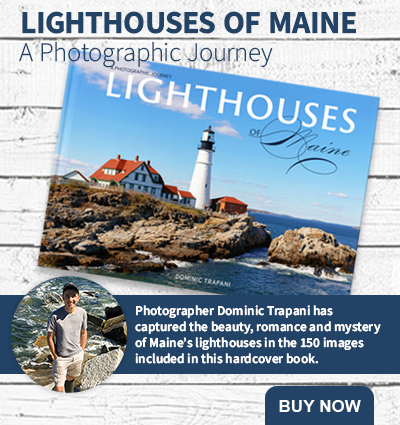